AMS Special Session on Quaternions, I

Abstract. The Graovac-Pisanski’s distance number of a graph G  measures the average distance each vertex is displaced under the elements of the automorphism group of G. In this talk, we will
discuss the Graovac-Pisanski’s distance number for graphs whose automorphism groups are isomorphic to a quaternion group.
8:30 AM
Waring’s Problem in Quaternion Rings
Spencer Hamblen, McDaniel College
Abstract. Quaternions are often used to demonstrate the proof of Lagrange’s Four Square Theorem. The generalization of this theorem to higher powers is Waring’s Problem, which itself can be generalized to any ring

: what is the minimum number of

) necessary to represent every element in

that can be represented as the sum of

-th powers?
Paul Pollack recently proved the existence of the Waring number over integral quaternions for any power

. We investigate Waring numbers in

, the set of elements with integer coefficients in the quaternion algebra with

for many values of

, and give general bounds for

9:00 AM Timelike Christoffel pairs in the Split-Quaternions
Martha Patricia Dussan Angulo, University of Sao Paulo
Abstract. The goal of this talk is to characterize the Christoffel pairs of timelike isothermic surfaces in the four-dimensional split-quaternions. When the ambient space is restricted to three-dimensional imaginary split-quaternions, we establish an equivalent condition for a timelike surface in

to be real or complex isothermic in terms of the existence of integrating factors. Our study was motivated by U. Hertrich-Jeromin works about Mobius differential geometry, London Math. Soc. Lectures 300 (2003), where an excelent study of the Christoffel pairs of isothermic surfaces in codimension-two was made using the quaternions

, and the Riemann surface structure. So, this talk contributes to show the natural extension of the quaternion algebra to the split-quaternions algebra and to use that extension, together with the split-complex numbers which appear naturally, to look at the complex or real isothermic timelike immersions and its associated pair. The results to be presented in this talk form part of a joint work with Prof. M. Magid (Wellesley College).

9:30 AM
Quaternion as space-time events and operators, a new symmetry for gravity, and analytic animation software
Douglas Sweetser, Quaternions.com
Abstract. A light sketch of 3 deep areas of study will be provided.Quaternions will be treated as events in space-time and as operators on those events. The origin in space-time is here-now, the present, where one is confined to be. Quaternions are famous for rotations in 3D space,

mean in space-time? A space-like separated source sends information to the observer at the origin one tick of a photon clock into the future, so here-future is a negative number. Unity does not change a thing, which would be consistent with a here-past operator.The second subject is a new approach to gravity. If an event is squared, the Lorentz invariant interval sits next to three other terms,

If two observers at different heights in a gravitational field agree about the space-times-time terms, that symmetry could form a new approach to gravity that is distinct from general relativity. It would bend light.Analytic geometry was Descartes’ long-lasting contribution to math. It is time to modernize and develop analytic animations. The structure of the software should mimic physics, using base and tangent spaces to describe physics fields. There will be a demo of a few apps one can play with on a phone. 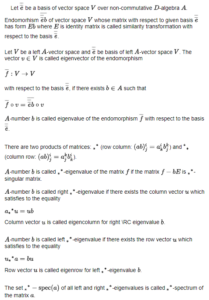 10:30 AM
Designing holonomy mazes
Henry Segerman, Oklahoma State University, Stillwater, OK
Abstract. Holonomy mazes are physical puzzles in which a piece moves along a network of rails on a surface. The piece is prevented from rotating other than by holonomy. Pegs alongside the rails block movement of the piece if it has the incorrect orientation, creating a maze. I’ll talk about the problems involved in choosing the peg locations to make an interesting maze. Since the orientation of the piece is important, the maze is best thought of as being embedded in the unit tangent space to the surface. If the surface is a sphere, this is real projective space, which is conveniently described with quaternions.

11:00 AM
On the best generators for PU(2), Part I
Terrence Richard Blackman, Medgar Evers College – City University of New York and Zachary Stier, UC Berkeley
Abstract. We discuss recent algorithmic work in the design of universal single-qubit gate sets for quantum computing. Using quaternionically–derived “super golden gates,” we connect the problem of efficient approximate synthesis of given gates to arbitrary precision in quantum hardware design to “icosahedral gates” constructed using the symmetries of the icosahedron, which enjoy a form of optimality. This is joint work with Zachary Stier.

11:30 AM
On the best generators for PU(2), Part II
Zachary Stier, UC Berkeley
Abstract. Abstract. We discuss recent algorithmic work in the design of universal single-qubit gate sets for quantum computing. Using quaternionically–derived “super golden gates,” we connect the problem of efficient approximate synthesis of given gates to arbitrary precision in quantum hardware design to “icosahedral gates” constructed using the symmetries of the icosahedron, which enjoy a form of optimality. This is joint work with Zachary Stier.

1:00 PM
The standard model’s particle content as a Jordan algebraic mosaic
Nichol Furey, Humboldt-Universität zu Berlin and Beth Romano, University of Oxford
Abstract. Our best understanding of fundamental particles is summarized in the Standard Model of Particle Physics. Loosely speaking, these particles are described by a long list of irreducible representations of the gauge group

and spacetime symmetries of the (universal cover of the) Poincare group.
On one hand, this description works remarkably well – to the extent that over the last few decades, experiment has succeeded little in luring the standard model from its originally proposed particle content. On the other hand, this choice of groups and representations continues to evade a logical explanation. Why these groups and representations, while not others?
In this talk, we demonstrate that a set of vector spaces, quite close to the standard model’s particle content, can be embedded inside the 256-dimensional Euclidean Jordan algebra

. Eight dimensions within the algebra have yet to be identified. We close in pointing out how this particular embedding stems from the left- and right-multiplication algebras of

. This talk will not assume a background in particle physics, nor normed division algebras. Everyone is welcome.

1:30 PM
Sierpinski triangle and coquaternion self-similarity in hierarchy of biologic functions
Garri Davydyan, Appletree Medical Group, Ottawa, Canada; Moscow State University named after M.V.Lomonosov (formerly)
Abstract. Feedback is a functional mechanism providing biologic systems (BS) with regulated outcome. Feed and back actions form closed loops between two elements where the back portions of the loops are mediated by neural system. Negative feedback (NFB), positive feedback (PFB) and reciprocal links (RL) (PNR) are recognized regulatory mechanisms providing stability of biologic functions. Expressed as 2×2 matrices of linear dynamical systems, PNR acquires the properties of basis elements of imaginary part of coquaternion. Mechanism of splitting of developing characters doubles dimensionality of the functional space of the system; each of two split components becomes functionally stable, reproducible, therefore, autonomous as a system. As an autonomous unit each system is assumed to be regulated by integration of PNR patterns acting as coquaternion basis elements. Coquaternion is algebraically closed structure, therefore PNR matrices and a matrix representing identity element can be considered as a functional model of BS. On hierarchical tree of the systems, coquaternion structure of the root elements is embedded in the “functional space” of the branches. It creates functional self-similarity as a hierarchical principle of functional organization of BS.

This entry is licensed under a Creative Commons Attribution-NonCommercial-ShareAlike 4.0 International license.

Need help with the Commons? Visit our
help page Send us a message
Skip to toolbar

Built with WordPress Protected by Akismet Powered by CUNY